.LET THIS BE THE RAIN.

.LET THIS BE THE RAIN.
Bob Komives

A Morning Among These Days

As a morning among these days ends,
a few blocks from our home
a peaceful protest march begins and ends.

As friends and neighbors march,
we stay home to mourn
a sudden, profound grief for loss of a friend.

News of death came unanticipated as we celebrated.
Separate but included,
we participated in a grandson's Continuance
from his 8th grade to high school.

Before this joy
(and for a third time in three days)
we awoke to a joy:
news of a newborn among friends and family.

Joy
then joy
then mourning.

A morning among these days has ended.

A Morning Among These Days
Bob Komives

Where is the Way?

An innocent man, Mr. George Floyd:
murdered by someone sworn to protect.
An old-old pharmacy called Lloyd's:
(where I shopped as a kid and once stole a Coca-Cola)
burnt to the ground.
A healthy baby is born
not far from where a virus patient has died.
A seed sprouts.
A beautiful, small bird nibbles at the feeder
as I grieve for the smaller and the larger community
into which I was born.
Family and friends grieve for their innocent loved one.
They are angry.
Angry neighbors protest and march, but ...
Near and distant strangers protest and march, but ...
Two astronauts get to orbit, but ...
They and their families feel proud and relieved, but ...
A grieving nation seeks a sliver of space
a sliver of time to feel good.
New parents can only rejoice.
They do rejoice, but ...
A family tries to grieve together, alone, but ...
A gardener sees the sprout
but feels drained of all power to rejoice.
Everywhere, a smile feels irreverent.
A tear barely dampens the mask.
Exercise fails to exorcise.
Sleep brings no more than another day.
Where is the way?
Where is the way?
Where is the way?

Where is the Way?
Bob Komives

Is This a True Spring?


A little drizzle, some sun;
a little rain, a rainbow, some thunder;
the fertile aroma of green.
Here, where plains meet the Front Range,
is this a true spring that comes to replace
our annual war between winter and summer?
Should I refuse to enjoy the gift?
It may be Global Warming trying to buy my vote.
Or, perhaps I should not look to find conspiracy.
Indeed, this may be but a random gift of nature
given here only once or twice in a lifetime.
As I take another deep breath,
I live to believe the latter.

Is This a True Spring?
Bob Komives

Is this that now hovers
the awaited rain
that will soon descend
to draw our thirst
before refreshment comes to ground?

Or is this no more than past rain that rises
and lingers a while to taunt our thirst
before our fertility departs? 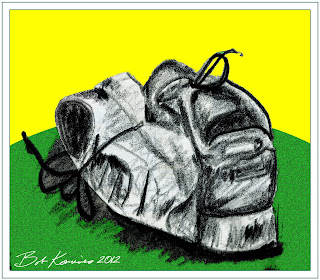 
and blame footwear for each fall

Email ThisBlogThis!Share to TwitterShare to FacebookShare to Pinterest
Labels: Person : Self, Transport

Yesterday's easy task,
—a bother to do—
—important to do—
remains undone.
Yesterday's task,
—yet more difficult today—
—yet more important tomorrow—
Dismay.
Task has grown.
I have withered.

Your hands are already longer.
In not long,
yes,
you too will be the stronger.
I look forward
to when you help me understand
later news,
science,
art,
and, perhaps,
to when you craft something so good
of paper or wood
that our good names belong
side-by-side,
there inscribed,
until whenever,
or until no longer
never far apart.

When I Need a Visitor


When I need a visitor:


with license from all authority,


sun comes into my home


to play a play that gives me joy.


three of my 4 grandparents were immigrants.

(the 4th, was son of fathers to the American Revolution)

(When she contracted fever aboard ship, her immigrant mother stopped others from throwing her into the sea.)

(not knowing which with which).

that one-of-three brothers had come earlier to an Illinois steel mill.

(The mill is gone, but a safety manual for this unsafe workplace survives to be read in his Hungarian, as well as in Slovenian, Romanian and tongues of other workmates.)

three grandchildren,
two sons-in-law,
both of my children,
two of my immigrant grandparents, and their
one son (my father) mastered tongues other than English in childhood.

More important:
My story-by-numbers is  faint footnote to your own.